THE LEGEND OF THE BLUE HORSE

A natural, ancient limestone shelf runs under Lexington, acting as a natural filter and nurturing our soil and grasses, helping our horses to be the strongest, fastest, and best in the world. According to local legend, a horse named “Big Lex” turned blue from dining on Lexington’s bluegrass and still roams Lexington today. Be on the lookout! 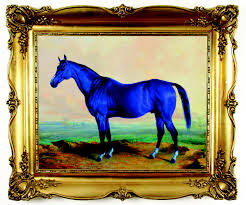 Portrait based on Edward Troye’s painting of the famous racehorse, Lexington.

Lexington is rich in tradition and history. Well-known explorer Daniel Boone established nearby Boonesboro, one of the first settlements in the state, in 1775. It helped pave the way for others to follow and settle an area known as McConnell Springs, Lexington’s birthplace. The settlers later named the area after the site of the opening battle of the Revolutionary War at Lexington, Massachusetts. Fayette County was named in honor of Marquis de Lafayette, France’s largest supporter of the American Revolution in 1780.

Once a part of Virginia, Lexington was granted 710 acres by the Virginia General Assembly in 1782. Ten years later, Virginia released Kentucky, and it assumed statehood, making Frankfort its state capital.

In 1812, Henry Clay, who is known as “The Great Compromiser,” built Ashland, a 400-acre estate. Lexington opened its first city school in 1834. When the 1890’s rolled around, tobacco replaced hemp as the major cash crop in the Bluegrass. By the early 1900’s, Lexington became the world’s largest burley tobacco market.

In 1924, William Monroe Wright, founder of Calumet Baking Powder, joined with a number of farms to form Calumet Farm, home of eight Kentucky Derby champion Thoroughbreds. Legendary Keeneland Race Course opened to huge crowds in 1936, while planes began taking off from nearby Blue Grass Airport in 1942.

WHAT IS THE DIFFERENCE BETWEEN LEXINGTON AND FAYETTE COUNTY?

Lexington and Fayette County are the same entity. In 1974, they merged to become the Lexington-Fayette Urban County Government (LFUCG). So when you say Lexington you are also referring to Fayette County and vice-versa. This also means that Lexington is a unified tax district and any data available at the county level also applies to the city.

WHERE EXACTLY IS LEXINGTON?

Lexington is at the crossroads of Interstates 75 and 64, about one hour south of Cincinnati, OH and one hour east of Louisville, KY. In fact, Lexington’s central location is incredibly advantageous as it is within 600 miles of 50% of the US population.

Have a question you need answered? Our Research Department would be happy to assist you! Contact Katie Vandegrift, Director of Marketing & Research, at 859-226-1620.