There’s a lot of hype nationally around the resurrection of a crop many people think was the first harvested by man. This isn’t the first time this versatile and durable plant has come to the forefront of industry. In 1942, the U.S. Department of Agriculture heavily subsidized the production of hemp for use in World War II and even released a film called “Hemp for Victory” promoting growth of the crop. With the end of World War II, hemp processing plants were shut down and faded away. The Controlled Substances Act of 1970 further shut the doors on the once booming industry.

In recent years, Kentucky has been leading the charge in hemp legislation to bring back the once booming industry. This rise began with the passage of the 2014 Farm Bill, creating the state’s Industrial Hemp Research Pilot Program through the Kentucky Department of Agriculture (KDA). Agriculture Commissioner Ryan Quarles stated with the creation of the hemp research program that the goal of the initiative “is to position the Commonwealth’s growers and processors to ultimately prevail as national leaders in industrial hemp production.” 2018 ended with the passage of another Farm Bill, also known as the Agriculture Improvement Act of 2018, making hemp an ordinary agricultural commodity. Kentucky Senate Majority Leader, Mitch McConnell, heavily supported these efforts and provided leadership in securing their passage.

Kentucky is the Hemp Leader

Since 2018, a clear resurrection has occurred in Kentucky’s hemp industry with licenses being awarded to over 200 growers, 72 processors, and 16,100 outdoor acres approved. These are compared to 2014’s 20 growers and 9 processors. Today, total licensed growers in the state has increased 385% to a staggering 969 and total licensed processors has increased 56% to 112. Behind this massive growth in Kentucky’s growers and processors is 56,000 approved acres for cultivation, a 248% rise from 2018. Additionally, Kentucky has approved over 6 million square feet of greenhouse hemp production. 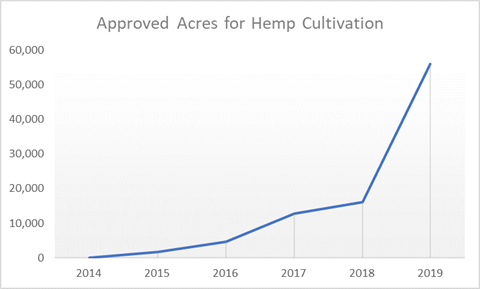 In 1942, Kentucky was known the abundance of hemp produced within the state and its expertise surrounding the plant with 50,000 uses. Today, Kentucky still believes in the “Hemp for Victory” motto, and all signs point to the state establishing itself as the national leader in industrial hemp production once again. This comes at no surprise to those that know Kentucky’s history with the plant. A unique history that includes the founder of one of their largest, automotive companies, Henry Ford, dreaming of creating a plastic car “which ran on hemp and other plant-based fuels, and whose fenders were made of hemp and other materials”.

Kentucky’s climate, soil, and proximity to major markets makes it the ideal location for hemp businesses. Companies in the Commonwealth have access to an abundant supply of growers, top universities pioneering research on the versatile crop, the agglomeration effects of a thriving hemp cluster, and to 65% of the U.S. personal income and population within a day’s drive. The heart of the hemp industry is Kentucky. 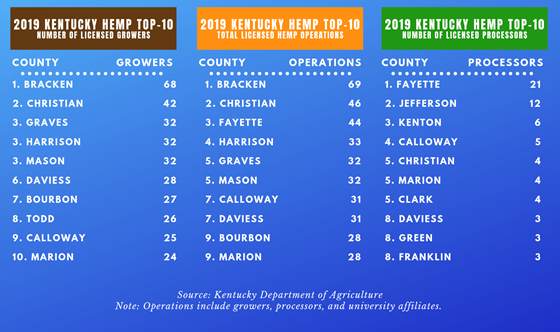 The Best of Kentucky is in the Bluegrass

As the Commonwealth has solidified its expertise in the industry, the question has become“Where is the best place in Kentucky for hemp companies?”. The answer is the Bluegrass Region. The Bluegrass Region is a name for Commerce Lexington Economic Development’s territory. It’s made up of eight counties including Bourbon, Clark, Fayette, Franklin, Jessamine, Madison, Scott, and Woodford. Another way of explaining the region is that it’s the Lexington-Fayette Metropolitan Statistical Area (MSA) plus Franklin and Madison Counties.

The Bluegrass Region is the top destination in Kentucky for hemp businesses for many reasons. Out of the 112 total processors in the state, 64 (57%) of them are located in the three major metropolitan areas of Central Kentucky (CKY), Lexington-Fayette, Louisville/Jefferson County, and Cincinnati/Northern Kentucky. The Bluegrass Region, which contains the Lexington-Fayette MSA, has 34 processors compared to Louisville and Cincinnati’s 20 and 10 respectively. Not only does the Bluegrass lead the way in hemp processing, the area also consists of 110 licensed growers which is the most of the Central Kentucky metros. 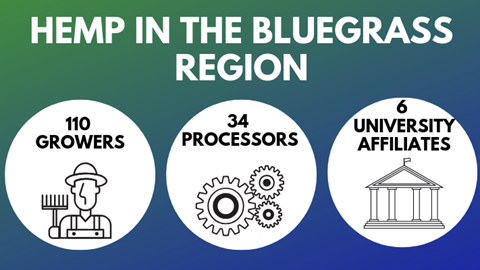 The most unique advantage hemp companies gain by locating in the Bluegrass Region is proximity to the state’s flagship university, the University of Kentucky (UK). UK is and has been leading the charge in developing hemp research that includes clinical trials to inform the creation of industry best-practices. GenCanna has demonstrated the competitive advantage UK provides as they’ve developed a patentable strain of hemp with 0.0% THC. In 2019, UK has 5 official hemp projects as recorded by the KDA. Beyond UK in Fayette County, Franklin County is home to Kentucky State University which also has one project affiliation according to the KDA. Overall, the Bluegrass Region is home to six of the nine university affiliates across the state, giving businesses located in the area access to a unique competitive advantage. For more information on hemp operations across the state, see the “Kentucky Hemp Operations” dashboard below.

Since the passage of the 2014 Farm Bill, the Commonwealth has worked hard to establish itself as a national leader in the hemp industry. With the passage of the 2018 Farm Bill, the Kentucky received another surge of hemp growth. In 2019, Commissioner Quarles’ goal for the state has been achieved, and, within Kentucky, the Bluegrass Region has risen to the top as the state leader in the hemp industry, making it the best destination for expanding and relocating hemp businesses. Hemp businesses grow best in the Bluegrass.

The Bluegrass Region has become home to an increasing number of hemp companies dealing with all parts of the plant. A few select companies are AgTech Scientific, Zelios, and GenCanna. Zelios is located in Fayette County, while AgTech Scientific and GenCanna reside in Bourbon and Clark. Each of these companies has played an important role in growing the Bluegrass’s hemp cluster. See the chart below for more details.