Every year the National Institute of Health (NIH), the largest public funder of biomedical research in the world at $32 billion annually, publishes a catalog of their investments on the Department of Health and Human Services’ Research Portfolio Online Reporting Tools (RePORT). Using this tool, the State Science & Technology Institute (SSTI) released an article displaying all NIH awards by metropolitan area from 2014 to 2018. According to SSTI’s data, Lexington ranks as a top-10 mid-sized metro for NIH awards and total funding per capita1.

For 2018, the list of the top metros, regardless of population, by total number of NIH awards includes many of the usual faces like Boston-Cambridge-Quincy, MA-NH (#1), New York-Northern New Jersey-Long Island, NY-NJ-PA (#2), and Los Angeles-Long Beach-Santa Ana, CA (#3). These top-3 metros rank the same for their overall funding received as well. It makes sense that these large metros, which all also rank in the top-10 by population size, would also receive the largest number of awards and total funding. However, when adjusted for population, the list changes substantially.

Where does Lexington stand in NIH funding as a community similarly anchored by a major, research institution in the University of Kentucky? Out of the 261 metros that received NIH support, Lexington ranks 23rd with six awards and 25th with $2,671,280 per 10,000 people. Among mid-sized metros with populations from 500,000 to three million, Lexington ranks 4th in awards and 8th in funding per 10,000 people, despite being the smallest member of the cohort. In total, the Lexington metro received 315 NIH awards and $138,024,223 in support. 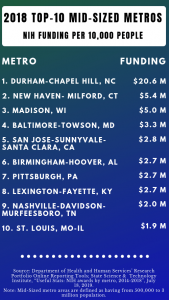 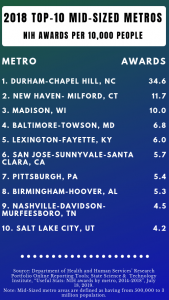 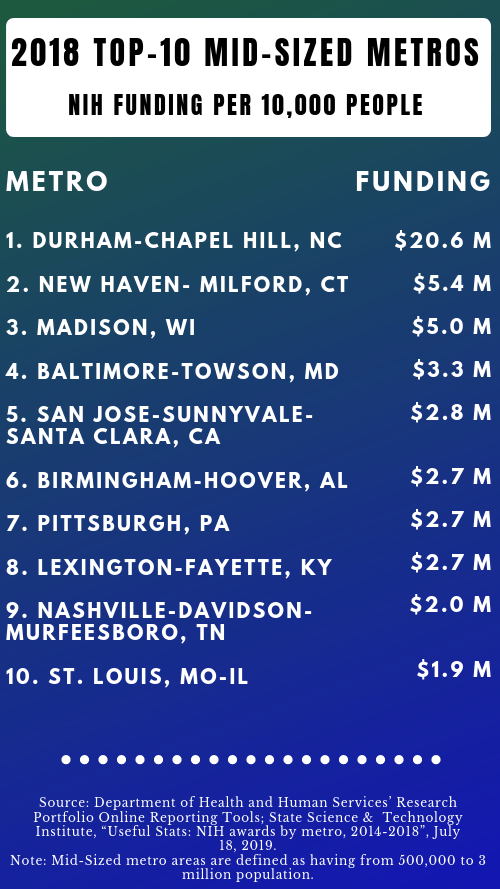 UK is the largest contributor to the area’s potency regarding the amount of biomedical research being done. In FY 2019, federal agencies have awarded UK $241.8 million, among which $159.4 million was from NIH. However, UK isn’t the only recipient of the awards.

In 2018, six companies from the metro received NIH support through the SBIR/STTR grant program. The Small Business Innovation Research (SBIR) and Small Business Technology Transfer (STTR) programs provide early-stage capital for small businesses engaged in R&D that can be commercialized and sold within consumer markets. The SBIR/STTR program supports creates jobs and stimulates the economy by funding innovation-driven startups focused on life sciences. Lexington companies like Enepret Incorporated, Biomedical Development Corporation, and more received anywhere from approximately $197,000 to $1.5 million in 2018. Additionally, the Kentucky Cabinet for Economic Development can provide companies receiving these federal funds a match award. Since its creation, the state’s matching program has supported the creation of 665 jobs, 208 patents, and the relocation of 42 companies to Kentucky3. Out of the 42 companies, 28 of them relocated to Lexington.