In September, the U.S. Census Bureau released their 1-year estimates for the American Community Survey. As with every data release, businesses, policymakers, educators, economic developers, and more rush to see what’s changed across the nation from the previous year. Arguably one of the most notable insights from 2018 are the declining populations of the nation’s three largest metros: Los Angeles, New York City, and Chicago. Beyond simply declining populations, the magnitudes of the drops are startling as the New York-Newark-Jersey City metro alone lost 341,399 (1.7%) residents in 2018[1]. Domestic migration data paints an even more dismal picture for these three metropolitan giants as New York, Los Angeles, and Chicago are losing 277, 201, and 161 residents every day to other U.S. cities and suburbs, particularly in the south and west. Writers have rightly started to ask, “Is this the age of the great metropolitan exodus?” It seems mega metro movers are in search of better climates and more bang for their buck; and Lexington’s four distinct seasons, high quality of life, and low cost of living are exactly what they’re looking for. Click the image below for more information. 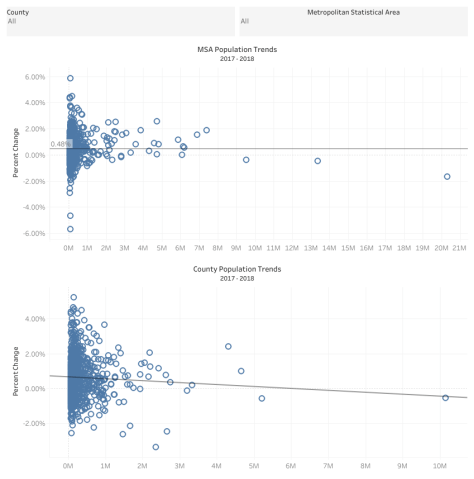 Derek Thompson, Staff Writer for The Atlantic, notes that, “There’s little mystery about where people are heading, or why: They are mostly moving toward sun and some semblance of affordability.”[2] In 2018, Chicago, Los Angeles, and New York City recorded average costs of living substantially above the average for all metropolitan areas, ranging from 23.3% in Chicago to 149% in Manhattan, compared to Lexington’s cost of living 5.7% below the national average. Lexington’s affordability has contributed to the city’s rankings as the #7 Top 10 Best Cities in America for Eating Out Affordably (Money, 2019), #6 Cities with the Best Work-Life Balance (SmartAsset, 2019), #3 Best City with the Highest Salaries and Lowest Costs of Living (GoBankingRates.com, 2019), and #2 Most Affordable Cities to Live and Work (BusinessStudent.com, 2019). For more details on how Lexington compares to the three largest metros, see the table below.

A low cost of living is certainly an advantage in attracting residents and businesses from more expensive regions, but it is insufficient if not accompanied by a high quality of life. For many years, metros like New York, Los Angeles, and Chicago compensated for their unaffordability by providing unique amenities and cultural assets that couldn’t be found in smaller areas. Thompson accurately states that,

“America’s biggest metros have attracted high-income firms and young, highly educated workers. On the one hand, this phenomenon had led to the sparkling revitalization of many downtown areas, a golden age of fine dining, and an eerie urban self-sameness with green-plant-and-exposed-brick coffee shops and lunch-in-a-bowl restaurants. But on the other hand, this urban blossoming has also made many desirable downtown areas too expensive for non-rich people to start a family, forcing new parents to move out to the fringes of the metro, or leave entirely. ”

Today, smaller areas have become more competitive in the amenities and cultural opportunities they offer. In the past few years, downtown Lexington has deliberately revitalized, adding shops and restaurants that capture the diverse culture of Lexington’s young population, such as Urban Outfitters, Vinaigrette Salad Kitchen, HopCat Brew Pub, Rock House Brewery, and Pies & Pints. In the heart of downtown, the Fifth Third Pavilion at Cheapside Park operates weekly events and supports a vibrant community. Thursday Night Live, an outdoor live music event, is held weekly from April to October at the Pavilion and attracts an average of 2,500 people each week. PRHBTN, a local community movement, has brought street art to Lexington, enriching the urban culture of downtown. Recent quality of life investments like these, alongside a growing and diverse economy, have led to Lexington being ranked as the #15 Best Cities for Young Professionals (GOBankingRates.com, 2019), #29 Best Places to Live in the USA (U.S. News and World Report, 2019), #2 Best Midsized City for New Grads (OnlineDegrees, 2019), and  #8 Best City to Live in America (Money, 2019). For more information and rankings, check out the Bluegrass Rankings and our Quality of Life White Paper.

In today’s economic climate consisting of record-breaking, low unemployment rates, where people are moving, staying, and growing is more important than ever. And with “the Money Conscious Generation”, more popularly known as Millennials, making up the largest percentage of the workforce, cost of living and quality of life have become a bigger factor in businesses’ site selection decisions. Lexington’s excellent quality of life, low cost of living, and young, highly educated workforce makes it the ideal destination for businesses and residents alike.