In 2011, former Mayor Jim Gray of Lexington and Mayor Greg Fischer of Louisville launched the Bluegrass Economic Advancement Movement (BEAM), an initiative to develop a joint regional business plan to support a leading advanced manufacturing sector with higher average wage jobs. With existing centers of excellence in the sector in both communities, including Toyota, Ford, Lexmark, GE, Lockheed Martin, and more, the mayors believed there was a unique opportunity to create a super-region that can compete on a global scale.

The BEAM Region represents over 2 million people in 22 counties, and approximately 31% of the BEAM population resides in the eight counties of the Bluegrass. In 2013, the Mayors in partnership with the Brookings Institution released a report – “Seizing the Manufacturing Movement: An Economic Growth Plan for the Bluegrass Region of Kentucky” – concluding that the Lexington-Louisville region has a promising manufacturing base, but will need to invest in more research, innovation, and workforce improvements to remain competitive. The BEAM project is ongoing as key regional partners continue to investigate targeted strategic investments.

Securing the support of the Brookings Institute, a nonprofit public policy organization, brought substantial expertise and connections to the BEAM initiative. The project used Brookings’ “Metropolitan Business Plan” framework to develop a comprehensive economic development effort designed to nurture and support manufacturers and their supply chains. The goals: quality job creation and increases in export activity.

The mayors have assembled a small board of directors comprised of business leaders from both communities to oversee the project. Paul Costel, president of JP Morgan Chase Bank’s Kentucky market, chairs an Advisory Committee which helped raise $250,000 to provide capital to the project. In addition, Mayor Fischer committed 25% of the Bloomberg Grant for Innovation to the Bluegrass Economic Advancement Movement.

Commerce Lexington Inc. and Greater Louisville Inc., the chambers of commerce in each community, agreed to help raise funds, and leaders from both organizations assisted with the project.

Through the vision created by the entrepreneurial spirit of former Mayor Gray and Mayor Fischer, this collaboration has the potential to be a game changer for Kentucky. Strengthening the state’s urban areas will lead to more prosperity for all its citizens. And this project is only the beginning. Lexington and Louisville have the opportunity to build on their partnership and explore common strengths well beyond advanced manufacturing, bringing increased global visibility and investment to the state. 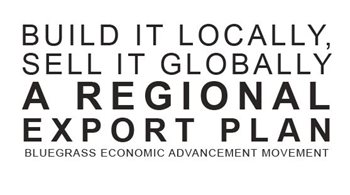 In 2012, the Mayors launched a new goal: “Build it Locally/Sell it Globally” initiative to increase export successes by 50% in five years. This focus on exporting is a key aspect of BEAM’s broader goal to promote growth among the region’s businesses. Research shows that exporting firms – whether manufacturing or services – grow faster and can afford to pay their workers better than non-exporting firms.

Foreign-owned firms in the U.S. make outsized contributions to the fundamental components of vibrant economic centers, accounting for significant innovation, research, and exports production, in addition to high-wage jobs. The BEAM Trade and Investment Plan, developed in collaboration with the Brookings Global Cities program, examines the importance of foreign direct investment (FDI), particularly in the largest U.S. metropolitan areas. The plan proposes the way forward for metropolitan-led cultivation of FDI that helps build a resilient and growing BEAM economy for all.

FDI significantly contributes to our economy. Foreign firms employ about 5% of the private sector in large metropolitan areas, but account for 7% of compensation, 12% of productivity growth, nearly 19% of corporate R&D, and over 20% of exports. In the BEAM Region, foreign investments have contributed to performance in automotive, chemical, steel, and plastics manufacturing, as well as to the signature bourbon and thoroughbred horse industries.